Last year Masen Holmes enrolled in UBTech’s Carpentry Program, he was in his freshman year at Uintah High School.
“I want to have a career in the construction industry,” Holmes said. “Either as a general contractor, electrician, or maybe even an electrical engineer. I want to get my headstart in learning those skills, so I enrolled into the Carpentry program.”
Students in the Carpentry program were building a tack shed and Masen decided he wanted to try doing the electrical wiring for the project.
“The inspector came to check everything, and he was impressed that everything was correct,” Holmes related. “My instructor decided that I should compete at the SkillsUSA State competition in electrical wiring.” 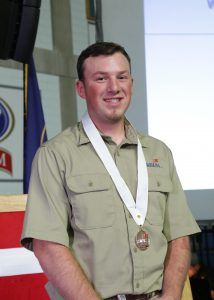 To prepare for the competition, Holmes had assistance from industry members who helped him sharpen his skills. When he returned from the competition, he brought home the gold medal, qualifying him to compete at the SkillsUSA National Competition in Louisville, Kentucky. His parents, Rhett and Kristi Holmes, traveled with him along with other UBTech students and staff to the national event.
“Nationals was mind-blowing. It is a huge event with thousands of supporters and participants. We were unaware of the amount of support for careers in trades on a National level,” his mom said. “It was a very exciting atmosphere.”
Holmes was inspired in his career choice by his parents who are the owners of Roofing World Home Improvement in Vernal. But Rhett and Kristi said they are inspired by the opportunities that UBTech provides for students.
Roofing World recently joined UBTech as a sponsor to support students. Roofing World will be donating the supplies for two local SkillsUSA competitions, and donating $5,000 in scholarships every year for the next ten years.
“UBTech is excited to have Roofing World as a partner of technical education. It’s because of people like this that we continue to have students complete a certificate with little or no debt,” said UBTech President, Aaron Weight.
“There are more routes than the traditional four-year universities,” said Rhett Holmes. “UBTech is a great option.” 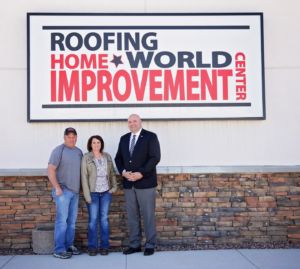 “These kids are our future,” added Kristi Holmes. “We want to help them obtain skills. We can help build a trained generation, and in turn, when these kids are contractors or working in the industry as adults, they support our business.”
The Holmes family invites students to explore technical education through UBTech. “Get a job that you love. Explore the opportunities now and see what you enjoy,” said Holmes.