Brady Hales’ journey to earn his Culinary Arts certificate may not have started out ideally. There were certainly bumps along the way, yet each was a testament to how inclusion made a tremendous difference in his education while a student at Uintah Basin Technical College.

Brady was fresh out of high school in 2015 when he enrolled in the UBTech Culinary Arts program the first time. Slightly older than a typical high school graduate, throughout his life Brady has dealt with an undiagnosed learning challenge. 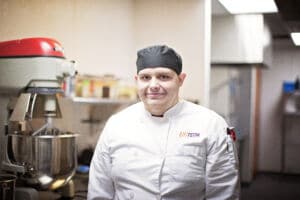 Brady Hales graduated in September from UBTech’s Culinary Arts program. He hopes to land a job as a baker. Inclusion played a large part in his success in the program, with open lines of communication and united efforts among several players eager to see Brady succeed. UBTech’s Culinary Arts program is ideally situated to help students who may struggle with learning difficulties, said Executive Chef Chris Taggart, CEC.

The year Brady first entered the Culinary Arts program was also the first year the program was offered at UBTech. The result was multiple learning curves for both students in the new program and their new instructors.

At the time, Brady became discouraged as he tried more than once to pass the ServeSafe test. “Both the chefs were new and there was a really hard test and I studied hard to pass it – but dropped out around 2016,” he said.

The test, an industry standard, deals with everything from microbiology to knowing the proper flooring surface for a specific cooking area.  It proved to be a frustrating barrier for Brady and with a few months of Culinary Arts classes behind him, he opted out.

Three years later a job opportunity knocked for Brady, said his mom Kim Hales. The door could be opened by graduating from the Culinary Arts program.

“We went to talk to Chef Chris about the difficulties Brady had when he started the program,” Kim detailed. “He said it was a new program at the time, and he really felt they had ironed out some of the kinks. So, we decided to give it another try.” 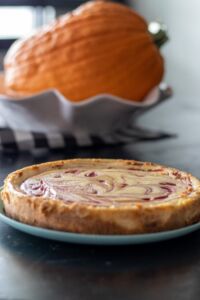 Baked goods are Brady Hales favorite food to make in the kitchen. This cheesecake is just one of the many things he has made. His family and neighbors are often the recipients of his culinary creations.

“As they gained traction as a program their ability to accommodate people who learn in different ways and who need differentiated instruction has really grown,” said Kim. “They focused on helping Brady study and practice for the ServSafe test.”

Brady too learned that he had a responsibility to keep his instructors in the loop. “Go and actually talk to them,” is his advice to students in need of extra help. “They are more than willing to help you with every struggle, but they need to know first.”

As they say in the kitchen, ‘the proof is the pudding’ and upon his return to the Culinary Arts classroom, Brady passed the ServSafe test on his first try.

“There are accommodations that were made, but he still had to understand the concepts and know the answers,” said UBTech Executive Chef Chris Taggart, CEC.  “From then on, he sailed through. He knew he was capable.”

“I passed every dish,” Brady confirmed.

“He was on time, he was ready to work, he had the tools he needed– that added to his success,” said Taggart.  “Brady never once said, ‘hey I struggle with this so I shouldn’t have to do this.’ He never used an excuse. Even on the difficult tasks, he was always willing to try and never afraid to fail.”

Taggart said Brady “would be an exemplary employee.”

When classes abruptly stopped being held in the spring due to COVID-19, efforts were doubled to be sure Brady continued to progress.

Brady Hales graduated from UBTech’s Culinary Arts program in September. The special occasion was marked by his family. Brady has a while to wait for the official UBTech graduation ceremony in May 2021. This was an extraordinary accomplishment for Brady who stayed the course as he dealt with lifelong learning challenges to achieve his goal.

“During COVID they made sure I kept up with my schooling. They gave me recipes to do at home,” said Brady.

The lines of communication extended to others involved in helping her son achieve success as well, said Kim. “UBTech partnered well with others in the community including Voc Rehab representatives Sharon Denison and Keri Brown. They made sure he not only got the academic help but financial support as well.”

“We will coordinate services with a student’s rehabilitation counselor at Vocational Rehabilitation or Deseret Industries and their employment counselor at the Department of Workforce Services,” said LaMuth. “We will act as a conduit for information between financial aid, instruction and the students sponsoring agencies.”

Parents should not be afraid to go with their child to meet those who will be involved in all aspects of their education, said Kim. “Be shameless about asking to tour the facility. If the child is over 18 ask that a privacy release be signed so you can communicate directly with advisors to be part of the support team.”