Leigh Lloyd named Educator of the Year by UBTech

Leigh Lloyd named Educator of the Year by UBTech

Uintah Basin Technical College (UBTech) has announced their selection of UBTech Medical Assistant instructor, Leigh Lloyd, as their Educator of the Year.
“Leigh was chosen because of her hard work and efforts to provide students with quality education.” Said UBTech President Aaron K. Weight.

Lloyd, along with a few other select educators from the Uintah Basin, were slated to receive their special recognition for their accomplishments at the annual Education Summit, but due to COVID-19 the annual event was cancelled.

Micah Jackman said she was nervous about going back to college after being out of the classroom while raising her family but, was soon put at ease by Lloyd’s caring attitude. 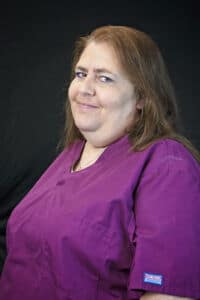 “She was always personable and really cared that we succeeded in the program,” said Jackman, who works as a medical assistant at Uintah Basin Medical Center. “She was involved and did a great job offering strategies and activities to help us learn because we were all so different in our learning styles.”

Randee Saxton said Lloyd was a caring and motivational influence for her – not only during personal challenges she faced during the school year – but also when class plans were changed in a matter of minutes due to COVID-19.

“Our externships were pushed up a month sooner than expected and quite a few of us were nervous. She kept us going even though we were not in class; she reached out to me several times during this time,” said Saxton. “She’s been an amazing, amazing, amazing instructor! I could not have asked for a better instructor.”

“I thought about my students and their accomplishments and thought how the award is really about them and all they’ve done,” said Lloyd. “Then I felt proud.”
She said she believes that one of the most significant attributes of a good educator is having a belief in their students even before their students gain that belief in themselves.

“Pave a path for them, give them the keys and then watch them open doors. Enjoy the ride! I think we (educators) need to remember that each student is different, with their own needs and struggles,” Lloyd said. “We need to meet them where they are and get them to where they want to be.”