Hard Work and Practice Took UBTech Welder to the Top

Hard Work and Practice Took UBTech Welder to the Top

Roosevelt resident Jordan Wynn is one of the best welders in the United States and he has quite a story to share. It’s a story of perseverance and heartache, yet personally coming out on top.

Wynn is humble about his skill and brutally honest in his assessment of himself. 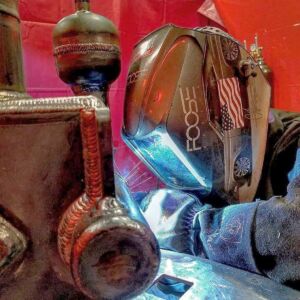 Jordan Wynn, UBTech 2017 graduate, competed in the 2018 AWS Welding World Trials. He competed in Alabama and was one of the top three finalists.

“I didn’t have the natural welding talent, I had to work for it,” he said. “I became passionate for the trade. I practiced at least 14 hours a day. I would eat, sleep, and weld.”

In 2017, Wynn was a welding student at UBTech and competed at the Utah SkillsUSA State Competition, bringing home the gold. That same year he went on to compete at the National SkillsUSA contesting, winning bronze.

Because the World Trials are held once every two years, all national welding competitors (regardless of placement) from 2017-2018 were invited to compete at the AWS Welding World Trials in 2018. The winner would move forward to represent the United States at the 2019 World Skills competition in Russia.

Such high achievement isn’t all that rare for UBTech welders. Chandler Vincent, another UBTech graduate, won the World Trials in 2016 and placed fifth in the 2017 World Skills competition in Abu Dhabi.

Wynn, who graduated from UBTech in 2017 and currently attends Utah State University-Eastern in Price, was among 24 contenders in the running for the World Trials competition.

Each welder had to submit their projects to be scored, with nine advancing following that round of judging. Each welder making the cut had to submit more of their work to be judged, with the top six continuing on. Wynn was among the final six.

Last December Wynn traveled to Alabama for a rigorous four-day welding completion, facing the best five of his peers in the nation. Each contestant welded plates, sheet metal projects and pressure vessels under a time constraint. In January Wynn’s name was announced as one of the top three semi-finalists from the World Trials for the chance to compete this year in Russia for the World Skills title.

The trio met again Alabama in February and went through a “tune-up” training with welding experts. Vincent was one of their coaches. This time the remaining three had to produce the same projects again, but in an even shorter amount of time.

That’s when Wynn said he made a mistake.

“I almost quit once I made my mistake, but Mason Winters (another UBTech graduate who is now a welding instructor at USU-Eastern) pushed me to keep going,” Wynn explained.

Wynn perseverance gave him wins in two of three categories. Still, his mistake cost him a win in the pressure vessel category. 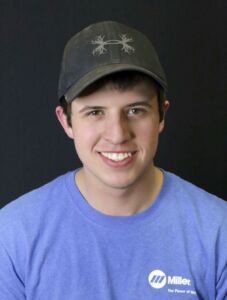 Jordan Wynn shares his story of perseverance. Wynn competed in the 2018 AWS Welding World Trials making it all the way as one of the top three finalists. By less than one point, Wynn ended up placing second.

After the final tally, Wynn lost by less than one point.

“It haunts me sometimes, but I can’t let that define me,” said Wynn, adding he was certain of one thing. “I couldn’t have spent any more time practicing.”

Wynn said he enjoys the opportunities he has had to mentor other welders. Dalton Van, a current high school senior at UBTech is competing at State SkillsUSA next week. If Van wins the gold again, he will eligible to compete at the AWS Welding WorldTrials in 2020. Van also competed in the WorldTrials against Wynn as one of the first 24 competitors.

Wynn holds Van’s skills in high regard, viewing him as a “natural talent” when it comes to welding. Wynn said he could see that even as a freshman, Van’s welds were just as good as the juniors and seniors.

“If Dalton wins state again and competes at the WorldTrials next year, I would be more than willing to help,” said Wynn.
Wynn will graduate from USU-Eastern with both an Associate of Applied Science and an Applied Science Degree. He looks forward to enrolling at Weber State University, where he plans to seek a Bachelor’s of Science in Manufacturing Engineering with an emphasis in welding.

“USU has been a great experience,” said Wynn. “It has helped me get more welding knowledge. I had more shop-time and hands-on experience at UBTech and USU gave me more book study and knowledge. Both colleges and training complement each other.”

Wynn recommends that students serious about welding start at UBTech before going to USU-Eastern. “Both USU and UBTech have great instructors that have helped prepare me for competitions,” he said.