Is College Really the Only Pathway to Success? Here’s What Some States Are Doing to Help Young People

Is College Really the Only Pathway to Success? Here’s What Some States Are Doing to Help Young People

SALT LAKE CITY — College costs are rising and many students fear amassing significant student loan debt, but college is often drilled into high school students as the only option if they want to succeed.

Even as experts call the path straight from high school to college a good one, they are also increasingly lauding apprenticeships and other training programs that teach young people the skills they need for well-paying jobs — electrician, carpenter or auto mechanic, among scores of other occupations the country also needs — that don’t require a four-year college degree.

Those alternate routes into the middle class, they say, do not preclude college. They can be a tool that makes college affordable or an alternative to college. The problem is, many students don’t know about them as they’re making decisions about their futures. 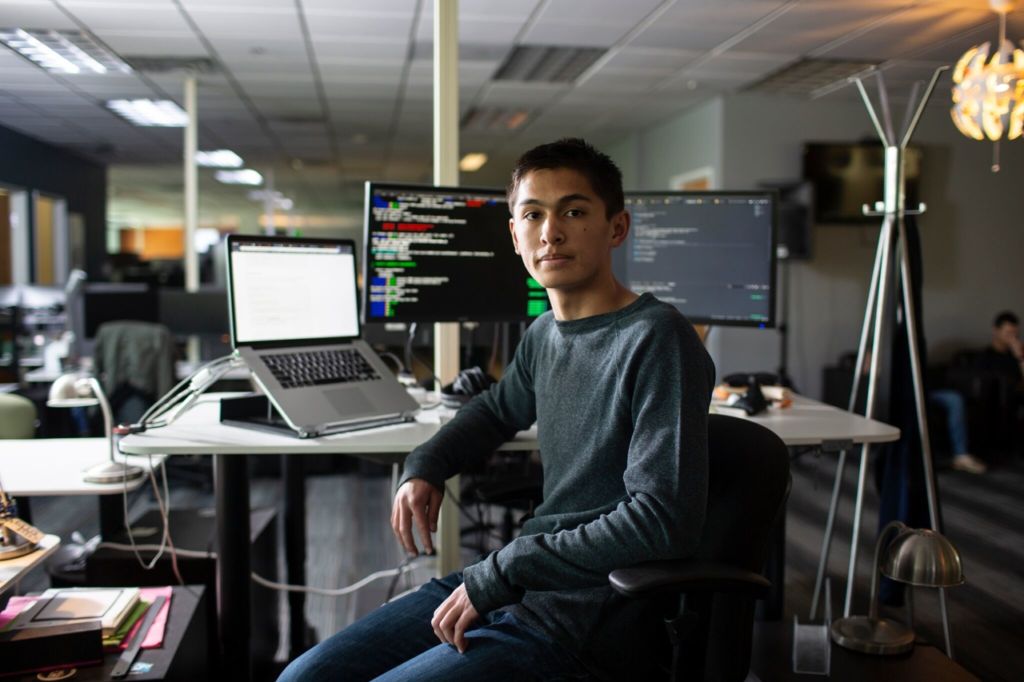 Colorado and Michigan are among states taking a serious look at how to give young people skills to succeed financially. They aren’t discouraging college as an option, but they say students graduating from high school should have a better sense of all options, including skilled trades.

“I do think college has been oversold,” said independent college consultant Eva M. Dodds of Franklin, Michigan, who believes too-narrow focus on college may shortchange a young person’s skills, interests and options.

She’s not dissing college, said Dodds, who got her graduate degree at Harvard and acknowledges dropping the “H bomb” — Harvard — has opened many doors. But she worries students aren’t learning about options that might better meet their individual needs.

“Our culture tells 18-year-olds it defines them as successful or not successful depending on which college they’re admitted to,” she said, noting she is biased toward college. But she regularly encounters students with no idea what they want to do and long to try different careers — or at least have time to research different options.

“If a student knows what he or she wants to do, it doesn’t necessarily require college,” she said. “That’s why we need people who are counseling students — inside or outside of schools — to be aware of the career paths.”

What matters is building skills to compete in a global economy, said Patrick O’Connor, associate dean of college counseling at Cranbook Kingswood Upper School, a private school in Bloomfield Hills, Michigan. While college remains a solid investment, cost and other issues mean some young people won’t make it there.

That doesn’t mean they can’t succeed.

Only a third of American adults hold a four-year bachelor’s degree. A number of challenges face those who would like to raise that proportion.
Four-year degrees often now take much longer than that. Complete College America says at most public universities, 19 percent of full-time students earn their four-year degree in four years. According to The New York Times in 2014, “Even at state flagship universities — selective, research-intensive institutions — only 36 percent of full-time students complete their bachelor’s degree on time.”

Since the recession, tuition cost overall “well outpaced inflation,” O’Connor said. “We are now in a spot where the cost of college is somewhat prohibitive for a lot of people and so it isn’t necessarily just a question of is a four-year degree worth it, because the data still suggests it is.” Dodds adds: “People are asking whether the debt is worth it.”

Many students start but don’t complete college. The Department of Education said that in fall 2016, full-time retention rate in postsecondary institutions was 75 percent.

Nor can colleges find room for all American young people, even if they wanted to go, said Wendy Wang, director of research at the Institute for Family Studies. Right now, about a third of young people go to college.

Young people should focus on “skills they need to achieve to be successful in their future jobs. These skills can be learned in college, but also in other settings,” said Wang. She said she is seeing a surge in interest in occupational training and apprenticeships nationwide.

Young adults need not have a bachelor’s degree to work in skilled trades, which instead require work experience and often vocational education. Jobs in skilled trades — such as welding, plumbing or manufacturing — are literally begging for qualified workers to fill them, Dodds said. “It’s a huge shortage.” She suspects over time more Americans will learn a trade that pays well and avoid college debt.

The New York-based Markle Foundation says “building a skills-based labor market that works for all Americans” in the 21st century will require rewarding skills instead of degrees and providing “multiple viable pathways into a career. A four-year degree isn’t the only path to success.” Markle warns success will mean becoming lifelong learners, because workers could need to train repeatedly “to adapt to trends we cannot yet anticipate.”

Complicating the problem, about 40 percent of college graduates are in jobs that don’t require a college degree — jobs that “historically have been filled by high school graduates,” said Richard Vedder, professor emeritus at Ohio University, who still teaches economics there.

It’s a two-fold problem: Some college graduates can’t find jobs that use their degrees, and some bosses now require a degree for jobs that don’t actually use skills taught in college. Burning Glass Technologies, which analyzes the labor market, said adults without a degree may find themselves shut out of jobs, even jobs they are qualified for. Postings for executive secretaries, IT help desk professionals and hundreds of others are already sometimes “credential inflated.”

Still, Vedder cited Bureau of Labor Statistics data showing fast salary growth in lower-skill fields: Those in retail trades see their wages rising faster than those with an engineering degree. “I’m not denigrating (engineering degrees) at all,” Vedder said. “The gap is still huge. But in a tight labor market like we have at the moment,” people can fare well in jobs that require less formal education and better technical skills.

“I think we need to show renewed interest in vocational or career colleges where one can study a year to be a beautician or a welder,” he said. “Welders make more than English majors and philosophy majors, for the most part. Maybe we should be training more welders, but I don’t think many are getting advice along those lines.”

While a college degree is valuable, O’Connor said questions should be asked: Is it for everybody? Must students enter college right after high school, or are there logical points to get some work experience, then go back to college? If there aren’t, can college be made more affordable? Finally, “Are there career paths that can begin with less than four years of college that end with four years of college down the road?” he asked.

Michigan’s exploration of career questions resulted in a 2017 law that beefs up training for school counselors. State officials had heard from companies with well-paid jobs that needed people to fill them — jobs graduating students knew nothing about, said O’Connor.

High school counselors now train in both college advising and career advising to maintain their license.

O’Connor said young people can get basic training for health, technology and manufacturing careers, for instance, on many paths, including college. One might earn an associate degree and through promotions and additional education over time secure better jobs. Many employers help with college costs. “And some of the entry-level jobs would get somebody pretty close to median income in Michigan by the time the student’s 20,” O’Connor said.

Parents may underestimate the value of career and technical training, he added. “Technology has integrated itself into so many fields it’s now a viable pathway to many promising careers for students willing to stick with it and be patient.”

O’Connor knows parents who don’t have four-year degrees and don’t see their value. Those with degrees may not appreciate other options that better suit their children.

“There are advantages both ways. The challenge requires all of us to put aside our preconceived notions — including counselors — and really focus on the interests, talents and opportunities students want to pursue, then go from there,” he said.

Even students who found high school a “dead end” may bloom in college or other programs, O’Connor said. “I think after high school can be a a rich learning opportunity for all students. Something awaits everyone to discover that could be a much richer experience than high school ever was.”

Must students know what they want to do with the rest of their lives right after they graduate high school? asked Dodd. Her experience with hundreds of students suggests some would benefit from a year to do community service or work before deciding what they want to do.

In 2015, Colorado’s then-Gov. John Hickenlooper and businessman Noel Ginsburg checked out Switzerland’s acclaimed apprenticeship program.
That resulted in CareerWise Colorado, a statewide youth apprenticeship model being built out to serve 20,000 youth apprentices in the coming decade. Career exploration starts in middle school. Three-year apprenticeships start junior year for those in the program, which Ginsburg heads as volunteer CEO, while running a manufacturing business.

“We emphasize equal dignity for college or apprenticeship. They can be as successful as they choose to be,” said Ginsburg, who noted apprenticeships aren’t offered for careers that won’t ultimately put participants in the middle class.

Swiss student apprentices who get four-year degrees earn 20 to 30 percent more in wages, because they have both “the theoretical from their education and the practical from their apprenticeship, so they are much more valuable in the marketplace,” he said, calling apprenticeships an “option multiplier.” CareerWise apprentices can earn college credit and wages to pay tuition.

Businesses pay fees and, over time, CareerWise will not cost taxpayers.

Apprentices learn skills from one of five pathways: advanced manufacturing, finance, information technology, business services and health care. Two more will start next year. “We will continue to build out until, hopefully, we can cover 90 percent of the economy or positions,” Ginsburg said.

He’s seen CareerWise’s impact directly. “The apprentices within our business enable us to grow and expand in a way we’ve been struggling with for decades. We’ve never been able to build that pipeline of talent” until CareerWise.

Apprenticeships are typically junior and senior year, then a final year. Apprentices can go into the business or on to college. The program needs about 40 percent retention in business to make company investment worth it. Apprenticeship wage is about $10,000 a year. And some companies help with college if apprentices stay.

He admits the program, now in its second year of apprenticeships, has some kinks. But the program still works so well an unnamed state will soon launch its version. Others, including Utah, have expressed interest.

Margaret Houser, 18, Fort Collins, has an apprenticeship with a company that makes plastic tubing connectors and other items for medical devices. “I knew engineering’s the field I want to go into,” she said. Working for Nordson MEDICAL solidified her goals. She’s halfway through her apprenticeship, then plans to go to college to study advanced engineering. “I’ll take a break and go to school, but there’s a good possibility I will apply back to a Nordson plant for a job as an engineer.

“Now I’ve seen the jobs, I know what they look like and what people do. I am confident that’s what I want to do,” said Houser, who said her apprenticeship has given her “the feeling I can accomplish things I never thought I’d be able to do. Building confidence, having interactions, having people rely on me to do my job — it’s shown me my goals are achievable. It really changed my life.”