Over the past five years, Uintah Basin Technical College’s welding programs in Roosevelt and Vernal have served more than 2,000 students. It’s a program that has rapidly gained increasing popularity with student enrollment overwhelming available space and equipment.

The demand for a new welding facility became even more urgent with statistics showing a looming nationwide shortage of welders.

According to the Department of Workforce Services, welders from Eastern Utah earn more on average than other areas in Utah. There is a need for the welding industry and the salary potential is high. 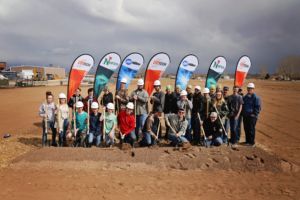 Ground breaking was March 15, 2018 for the new UBTech Welding Technology Building. Pictured above are UBTech welding students excited for the new facility.

UBTech is on the brink of opening a new 13,570 square-foot, $4.5 million state-of-the-art welding technology building. Ground was broken on the project on March 15, 2018 and construction has moved forward on schedule, with move in day projected to take place March 1.

The public is invited to attend the grand opening for the new welding technology building on March 21 at 2:30 p.m. The welding building is located on the southwest side of the Roosevelt UBTech Campus and east of the new Union High School.

The phenomenal success of UBTech’s welding program can be attributed to the state, national and world-stage accomplishments of UBTech welding students, all thanks to the instruction and leadership provided by welding instructors: Kevin Mitchell, Jeff Taniguchi, Rick Prather, and Ryan Taylor.

Over the past five years, UBTech welding student Chandler Vincent was ranked among the top five welders in the world at the WorldSkills competition. During the same time period UBTech has seen students bring back 11 medals from the Utah State SkillsUSA competition, along with students earning top five National SkillsUSA placement over four consecutive years.

Most recently Jordan Wynn continues to carry the torch, placing among the top three at the AWS US Open Weld Trials competition. Wynn is in Alabama right now competing for the top spot as the next US representative for the upcoming WorldSkills competition in Russia.

And it all started in a welding program in the small town of Roosevelt, Utah. 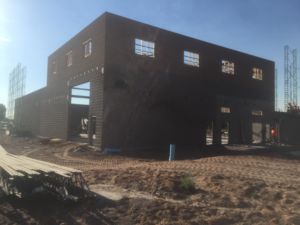 The beginnings of the new UBTech Welding Technology Building. Pictured above was the project site on July 3, 3018.

UBTech President Aaron Weight has had conversations with people from across the nation, who are aware of the award-winning welders produced at the small college in eastern Utah.

“They might not know where we are located,” said Weight, “but they know who we are and what kind of welders we produce.”

With the increase in students, the welding program became crowded and Weight recognized the need to expand the facility. Planning for a stand-alone welding technology building started in 2016.

The agreement provides scholarships for UBTech students and state-of-the-art equipment for all UBTech welding labs.

“Supporting the next generation of welders is critical, and our top priority is ensuring that the partnership with Miller and Norco provides the best support in the industry and allows UBTech students to learn on the most innovative welding equipment to prepare for a successful career.” Said Miller Segment Manager – Welding Education and Workforce Development, Jessica Marhefke. 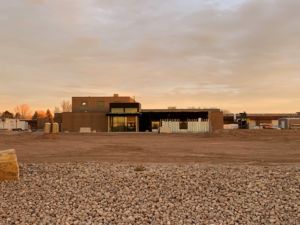 Front of the new UBTech Welding Technology Building. Pictured above was the progress made on November 27, 2018.

Unlike other building projects, which have taken up to ten years to fund, state monies for the new welding technology building were granted by legislators on the first request.

“The new Welding Center building is the culmination of a visionary College, a generous Legislature, and the dedication of many working professionals,” Added Matt Boyer, DFCM project manager.

“This building will not only serve the community of the Uintah Basin for many years to come, but it will serve all of the State of Utah through an elevated and skilled workforce entering the market place. It was an honor to participate in such a project and to work with so many talented professionals in the Basin.”

Gramoll Construction presented a “design build” project that included a package deal with both the construction company and the architectural design firm, CRSA.

“It was a smaller higher education project,” said Troy North, Gramoll Construction manager. “But because of the involvement of so many people and their willingness to make this successful, we now have this amazing facility.”

“We are delighted to report the project will be constructed within budget,” added Weight. “We are projecting a 3.5 percent project budget savings against the legislated appropriated project amount.”

According to North, when the bidding process took place, Gramoll committed to use “as many local subcontractors as possible.” 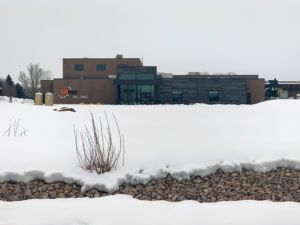 Almost ready to open doors! The public is invited to attend the grand opening for the new UBTech Welding Technology Building on March 21 at 2:30 p.m.

North said around 50-70 local employees have worked on the project.

“We tried to spread the dollars throughout the community,” said North. “We ate at local diners and stayed in the local hotels. We really had this community in our minds throughout this project.”

“People were very accommodating and there hasn’t been one person who hasn’t tried to help.” Said North.

“It is pleasurable to work with the technical colleges. They are really involved in the projects and you can tell they care about their facilities, faculty staff and students,” said North.

Joking about the future possibility of student growth, North added, “I told Kevin (UBTech welding instructor) that when the doors open and the students experience this new shop, to just hang on!”

The ribbon cutting and grand opening for the welding building will be March 21 at 2:30 pm. It is open to the public.

The welding building is located on the southwest side of the Roosevelt UBTech Campus and east of the new Union High School.