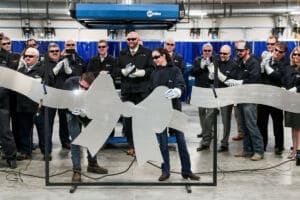 Spenser Heaps, Deseret News
Christopher Nolden and Lyciera Williams, both 18 and students at Uintah Basin Technical College in Roosevelt, use torches to cut a metal ribbon at the opening of the school’s new Welding Technology Building on Thursday, March 21, 2019.

Nolden said he was on a traditional college track, earning a 29 on the ACT test and admission to a number of universities including Princeton.

“I had all the opportunities to go wherever I like. But as I got older I just decided college wasn’t right for me and wanted to educate myself however I could,” he said.

After taking a night welding class last summer, he became increasingly interested in welding because of “the confidence that came with it, mainly. After that, all the knowledge and how to use the processes and apply them to my own life.”

Williams said she is about halfway through her welding certificate programs, so she will be among the first students to train in the new facility. 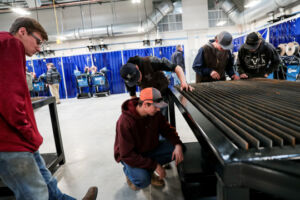 Spenser Heaps, Deseret News
Brayden Taylor, Jayce Cook, Baldo Navarrete, Ryan Chatwin and Collin Foster check out an oxy-fuel cutting table, which they helped build, at the opening of the new Welding Technology Building at Uintah Basin Technical College in Roosevelt on Thursday, March 21, 2019. All are students at Union High and are enrolled in classes at UBTech.

Weight said there is growing demand in the Uintah Basin, as well as the state and nation, for welders.

Demand for more capacity in the welding program at the Roosevelt campus of UBTech is also driven by the success of the program. The technical college has produced some of the top welders in the world.

Chandler Vincent was ranked among the top five in the world at the WorldSkills competition. UBTech students have won top honors in state competitions and its students have also earned top five National SkillsUSA placement four consecutive years.

Welding instructor Kevin Mitchell said there is high demand for welders in the area, particularly in oil and gas industries. Depending on a student’s training and experience and the job, welders can earn $15 to $120 an hour. 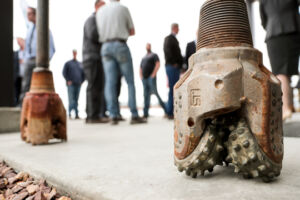 Sen. Ron Winterton, R-Roosevelt, said the new facility will “put a lot more trained personnel in the field. No longer are we going to have to import that kind of worker, we will have that here on site. Economically, these are good paying jobs.”

Once students complete certificate programs, they can roll over their hours into college degrees at Utah State University’s campus in Roosevelt, which is another boon, he said.

Former Sen. Kevin Van Tassell, R-Vernal, who secured the legislative appropriation to design and construct the facility, was also in attendance.

Thursday’s events also included the unveiling of a sculpture of a welder created by Utah sculptor Scot Olson. 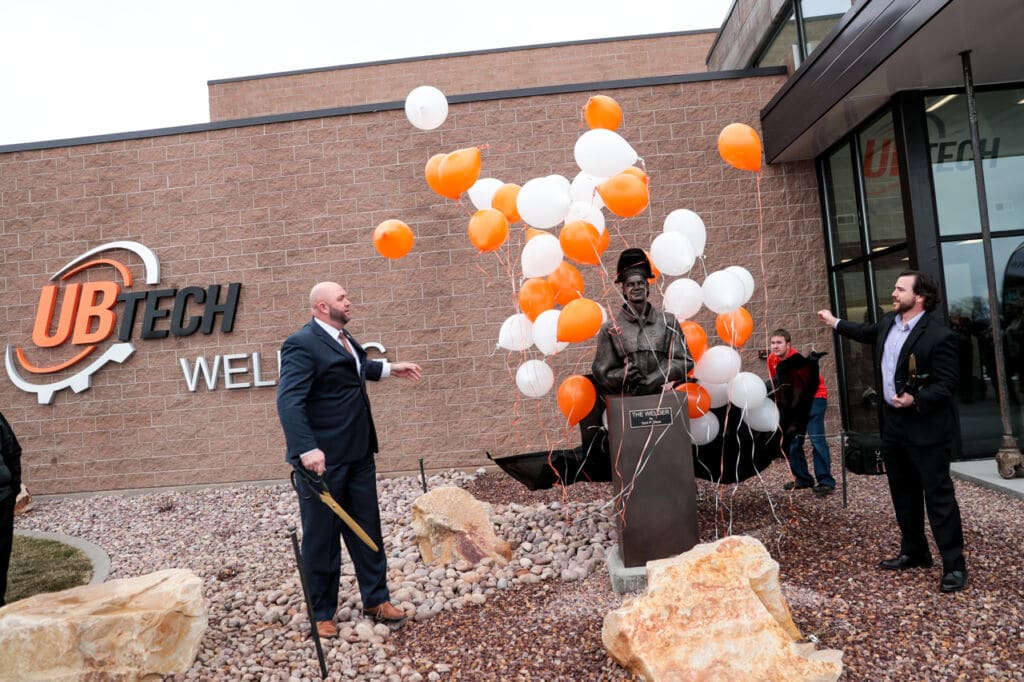 Spenser Heaps, Deseret News
Aaron K. Weight, president of Uintah Basin Technical College, left, and artist Scot Olson unveil a sculpture by Olson during the opening of the new Welding Technology Building at the school in Roosevelt on Thursday, March 21, 2019.

Olson said he was inspired by the idea of students “gaining skills and confidence” as they learn the latest welding technologies in a new setting.

Olson said it is his hope that graduates of the welding technology certificate programs pose with the sculpture on graduation day.

Jim Evans, chairman of the Utah System of Technical Colleges board of trustees, said the board held its meeting in Roosevelt to be part of the opening ceremonies of UBTech’s new welding technology building “because this is a big deal. As I look at some of the numbers, just under 300 adults and students out took welding classes last year and 90 percent of those, I was told, actually got a certificate of completion. I think 93-plus percent got employment in the welding field related to their trade.” 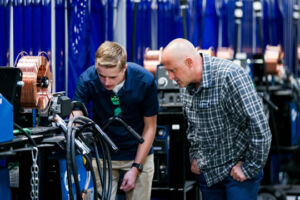 Spenser Heaps, Deseret News
Alec Goodrich, 16, who is enrolled in classes at Uintah Basin Technical College, and his father, Jesse Goodrich, both of Vernal, check out welding stations during the opening of the school’s new Welding Technology Building in Roosevelt on Thursday, March 21, 2019.

Troy North, construction manager for Gramoll Construction, said the company hired more than a dozen local subcontractors to work on the project, which took just over a year to complete. About $1.5 million in contracts were awarded to area companies, he said.

“It was a plus for us. It’s great friendships we’ve now developed we look forward using in the future,” North said.