On January 17, Roofing World received a “Connectivity” award from Uintah Basin Technical College. This award is given to companies and individuals for their industry connectivity and engagement with students and programs at UBTech. 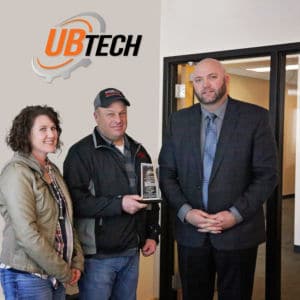 Rhett and Kristi Holmes, owners of Roofing World Home Improvement Center, attend the UBTech board meeting to accept the award. In April of 2018, Roofing World was inspired by the opportunities that UBTech provided students when their own son, Mason Holmes gold medaled at State SkillsUSA and went on to compete at the Nationals SkillsUSA competition in Louisville, Kentucky.

“Nationals was mind-blowing. It was a huge event with thousands of supports and participants. We were unaware of the amount of support for career in trades on a National level,” Kristi said. “It was a very exciting atmosphere.”

They decided they wanted to play a part in supporting technical education and joined UBTech as a sponsor to support student. Roofing World donates supplies for local SkillsUSA competitions and $5,000 in scholarships every year.

“UBTech is excited to have Roofing World as a partner of technical education. As a result of the generosity and visionBof the Holmes family, students have an opportunity to complete a certificate with little or no debt,” said UBTech President, Aaron K. Weight.