Snows honored as Champions of Education by UBTech

Snows honored as Champions of Education by UBTech

Three members of the Snow family were honored at a banquet hosted recently by Uintah Basin Technical College as Champions of Education. 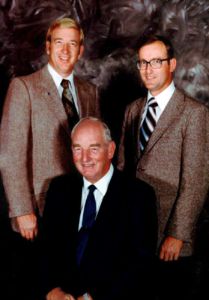 The patriarch of the family, Alva Crosby Snow was honored posthumously for the integral role he played in helping to plant the roots of higher education 50 years ago in Roosevelt. Also honored for their efforts in behalf of UBTech were two of Snow’s sons, Lynn and Gordon. Both men are retired Roosevelt Realtors who have served for decades in various positions in local and state education and government leadership.

UBTech President Aaron Weight noted this is the fourth year that UBTech has held a special night to honor those who champion the cause of education. He said the Snow family has left “fingerprints” on all four of the higher education campuses in the Uintah Basin.

“Education is always the key to success,” said Weight.

About a dozen of Alva Snow’s grandchildren and great-grandchildren who were in attendance came up to receive his award.

“It may be possible that anyone who took a class at UBTech over the last 50 years, was able to do that because of your grandfather and great-grandfather,” Weight told Alva Snow’s posterity. “What a tribute to his legacy.”

It’s estimated that some 200,000 students have taken classes at UBTech in the past 50 years.

In 1944, Alva moved his young family to Roosevelt where he became successful in the farm machinery, automobile and tire business. He and his wife Jean raised a family of 10 children as Alva devoted years of his life to promoting opportunities for higher education in the Uintah Basin.

In the late sixties he was instrumental in passing legislation to fund a junior college in Roosevelt – resulting in the birth of the Uintah Basin Center for Continuing Education, now known as Utah State University Uintah Basin.

“Alva Snow continually demonstrated an unselfish commitment to the community,” said Weight. “The road was long and never easy.”

At the ground breaking for the first USU Uintah Basin headquarters and classroom building in Roosevelt, Alva Snow said, “The words that are important here today are vision, determination and perseverance.”

“You see those words emulated in his posterity, who have also committed so much of their lives to the good of their community and held high the banner of educational opportunities for all in the Uintah Basin,” said Weight.

Alva Snow was remembered for anonymously helping several people “reach their dreams” of obtaining an education by paying for their tuition.
“It was always about helping people who had a desire to help themselves,” said Weight who offered a John Wooten quote to fit the occasion, “It’s amazing how much can be accomplished if no one cares who gets the credit.”

He served for eight years on the Duchesne County School Board, and for 12 years on the UBTech Board of Directors – including terms as president of both boards.

“Lynn was there in the mid-nineties when the technology wing was added to the Roosevelt campus – it now houses our medical and energy services programs,” Weight said. “He was there when UBTech earned their first accreditation as a college.”

Lynn’s persistent attention to every detail spoken and written was crucial during the years it took to obtain funding for the Vernal campus. The construction of that building occurred during his tenure as board president.

He not only talked the talk, he walked the walk, enrolling as a student in welding classes so he could learn how to cut pipe to build a horse arena.

And as Trenna Ballou, the recently retired administrative assistant to the president will tell you, “UBTech has no stronger advocate than Lynn Snow.”

If you know Gordon Snow, also a Champion of Education, then you know this is “not his first rodeo.” You also know he prefers to “keep it simple” – and before making a decision he wants to know, “is it fair and right?”

Among Gordon’s many accomplishments and public service was his election to the Utah House of Representatives for five consecutive terms. During his final term, before retirement from the House, he served as Majority Whip– one of the highest positions in state government.

Gordon’s colleagues and others agreed he was a “rarity among politicians.” Not only did he have a strong dislike for the spotlight, but Gordon Snow said what he meant and meant what he said 100 percent. 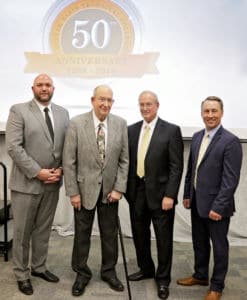 He was praised for being a statesman, for his integrity and honesty, as well as his thoughtful and fact-based decision-making.

Gordon said his decade of service was made possible to a great extent by his brother Lynn, who often had to carry a heavy workload as he shouldered the responsibility of running their business on his own.

After his mission to Santa Rosa, California with his wife Sarah, Gordon jumped back into politics, serving on the Roosevelt City Council.

“There are numerous ways Gordon’s service has benefited higher education in the Uintah Basin. Tonight we recognize two of his most recent contributions,” said Weight.

“One being nearly 10 years in the making; that of obtaining funding for a building in Vernal to house UBTech and the USU branch campus. Secondly, his current influence as a member of the Utah State Building Board, assisting in obtaining a favorable ranking for the new Welding Technology building at the Roosevelt Campus.”

“It is a real pleasure to know we have such advocates of education,” Weight said to the Snow family. “We have all benefitted from your selfless service.”