UBTech campuses sent 72 students to compete at the state level with 28 placing in the top three in their respective fields.

“With nearly 40 percent of our UBTech students medaling, the number was nearly triple the medalists from last year,” Weight said. “This year is the highest number of SkillsUSA medals coming back home in the history of UBTech.”

“I wish to express my appreciation and congratulations to all our faculty and staff who assisted in preparing UBTech students for this wonderful experience,” said Weight. “Your professionalism was exemplary and our students’ achievements were remarkable!”

All gold medalists qualified to compete at the National Leadership and Skills Competition in Louisville, Kentucky in late June. This group also broke a record for winning the most gold medals. 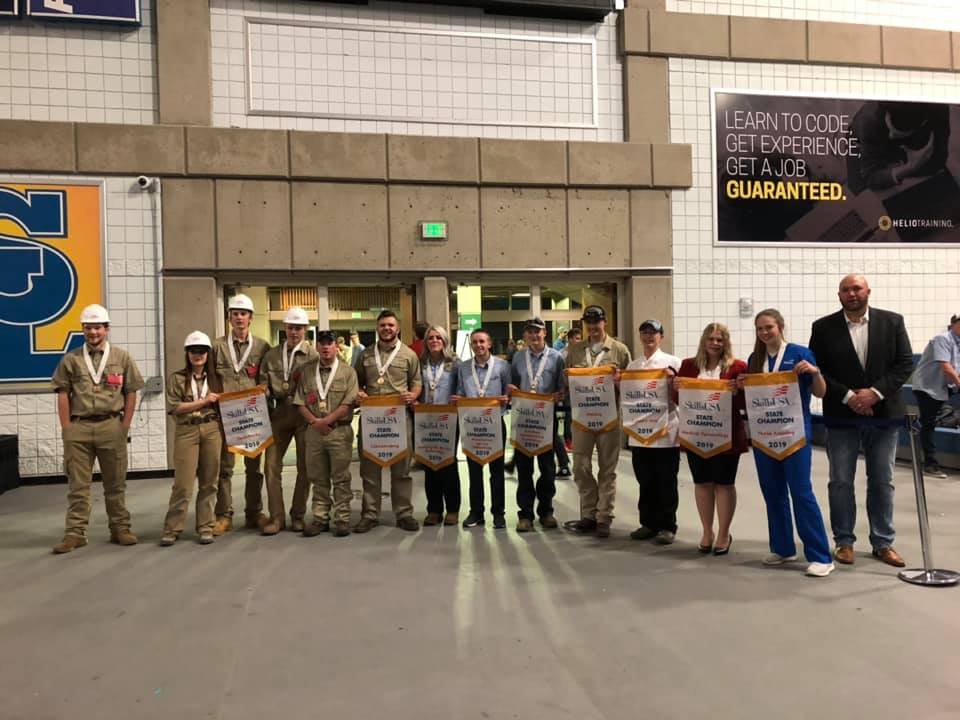 UBTech came home with 28 medals in gold, silver, and bronze from the 2019 SkillsUSA Utah Leadership and Skills Competition. Pictured above are 13 gold medalists and (left) UBTech College President Aaron Weight. This year was the highest number of medalists in the history of UBTech. All gold medalists qualified to compete at the National Leadership and Skills Competition in Louisville, Kentucky in late June.

A Roosevelt businessman has partnered with Uintah Basin Technical College in making a $250,000 donation to be used to help students with the financial costs of competing at state and national SkillsUSA Leadership and Skills competition over the next five years.

“I’m delighted to announce we have entered into a SkillsUSA partnership with Todd Bro and Iowa Tank Lines (ITL),” said UBTech President Aaron Weight. “Todd is a generous Roosevelt businessman impressed by the opportunity SkillsUSA provides our future workforce.”

When Bro and Chad Grimm of ITL heard about SkillsUSA they were impressed by its wide outreach to students in numerous UBTech programs, and its mission to encourage students to excel through competition. They quickly determined ITL would assist these students financially to be able to meet their goals.

“We want to provide an easier financial path for students who want to participate in SkillsUSA,” said Bro who moved to Roosevelt in 1999 and began Iowa Tank Lines. He was joined by Grimm in 2006. The company now has terminals in three states, operating 120 trucks and employing nearly 200 people.

“There is a great satisfaction that comes with being involved with our community. I have great love for the concept of what UBTech does, the concept of working with your hands, offering an education that is available to everybody,” said Bro.

“The American workforce is soon going to experience a massive shortage of employees who have the education and skill to work with their hands,” Grimm said. “We want to be a part of anything that shows what it means to go out and work with your hands and be a producer for this country. SkillsUSA will strengthen these students 100 percent.” 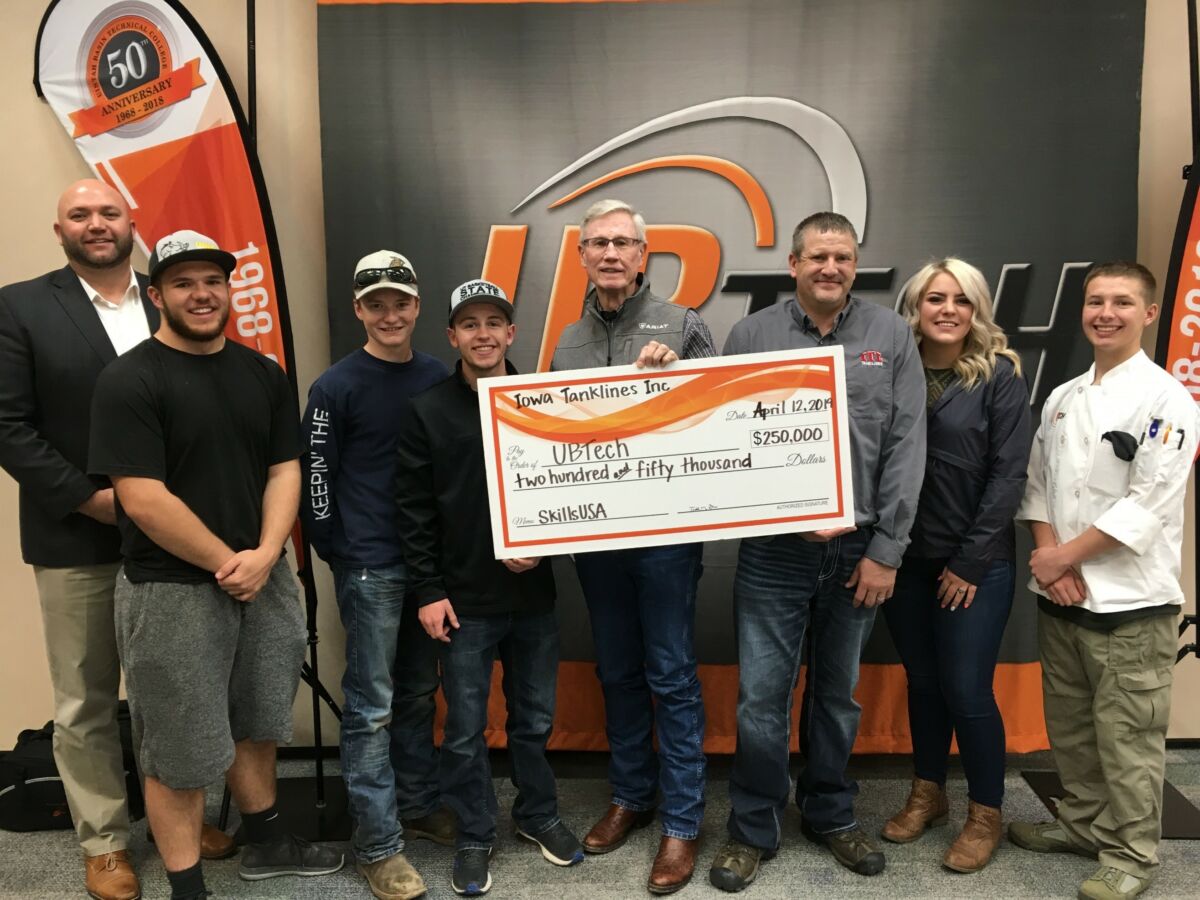 Students from UBTech who compete at SkillsUSA received a tremendous hand up with the costs of attending the annual state and national contests thanks to a $250,000 donation from Todd Bro and Chad Grimm with Iowa Tank Lines in Roosevelt.  UBTech President Aaron Weight thanked the men for their visionary leadership. UBTech is the first college in the state of Utah where such a SkillsUSA donation has been made. Weight said their generosity “will also inspire others across the state to follow suit.”  Pictured left to right:  UBTech President Aaron Weight; SkillsUSA gold medalists Brigg Edwards, Hunter Webb and Koby Thacker; Todd Bro, owner of ITL and Chad Grimm with ITL; and SkillsUSA gold medalists McKinlee Thacker and Alec Foster. 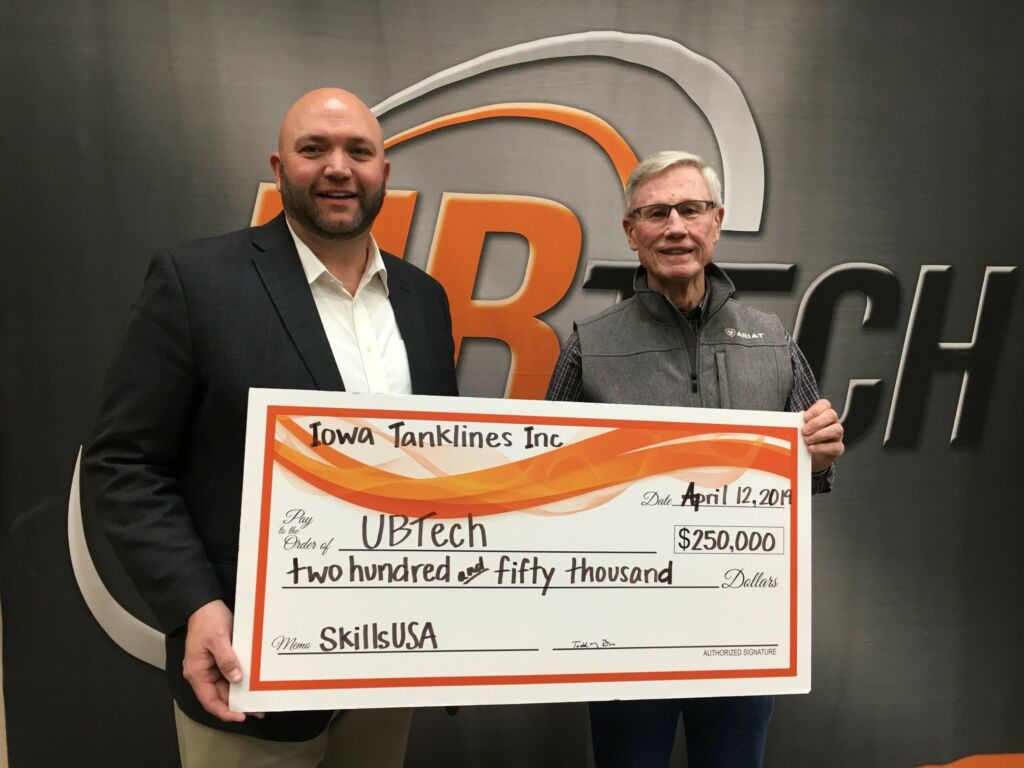