When you first look at McKinlee Thacker, with blonde hair and blue eyes, it may come as a surprise to find out she graduated with these three certificates: Automotive Maintenance and Light Repair, Intermediate Welding Technician, and CDL. 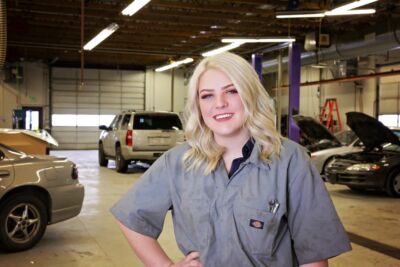 McKinlee Thacker, UBTech graduate of three certificates is selected as one of the 12 contestants on series Bitchin’ Boot Camp.

The news that McKinlee is one of 12 contestants on MotorTrend’s new competition digital series Bitchin’ Boot Camp won’t be all that shocking.

Dave Kindig and Kevin “Kevdog” Schiele from Kindig-it Design, the custom car fabrication shop featured on the TV show Bitchin’ Rides, visited UBTech early 2019. McKinlee and another UBTech student, Dalton Van, were featured on the clip that was televised December 2019. Dave was impressed with her many certificates and accomplishments. During their visit she was able to share her desire to work at their shop.

A casting director later contacted McKinlee and asked her to apply to be a candidate in Bitchin’ Rides new spinoff series Bitchin’ Boot Camp. Although hesitant at first, McKinlee was up to the challenge and was chosen to be one of the contestants who will compete to earn a full-time job at Kindig-it Design.

The series will be featured on MotorTrend’s streaming service, the MotorTrend App starting March 14. Kindig and Schiele are the hosts for the digital series.

McKinlee grew up spending a lot of time in her father’s automotive shop where she developed a love for cars and trucks. Still, she said she had to convince her mother that it was okay for her “little girl” to choose a career as an auto mechanic.

“During her early adolescent years, being knowledgeable in the auto industry was fun for her to spar with the boys,” laughs McKinlee’s father, Mark Thacker. “She would usually win. She hurt her back in sports, but it opened another door to UBTech. She flourished! She became who and what she wanted to be; it was the best thing for her.” 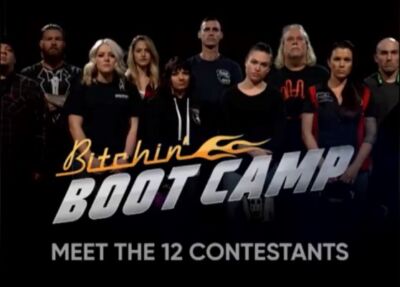 McKinlee Thacker is one of 12 contestants on series Bitchin’ Boot Camp. The show was released March 14th on the MotorTrend App.

According to Mark, when McKinlee’s mother, Bobbie, saw her daughter thriving, she quickly became an advocate and supported McKinlee. “It wasn’t a phase, it became a lifelong dream,” her dad adds.

McKinlee, who attended Altamont High School, had an hour round-trip commute each day to attend UBTech. She hopes to inspire other high school students to take advantage of UBTech programs while in high school.
After being named UBTech’s Student of the Year, McKinlee won the gold medal at the state SkillsUSA competition in Motorcycle Service Technology. She traveled to Louisville, Kentucky for the National SkillsUSA contest and placed fourth in the nation. McKinlee is currently enrolled at Utah Valley University to further her education in Auto Collision Repair and Business.
McKinlee said she almost didn’t apply for a chance to be on the show. “She was worried she wasn’t good enough,” Mark said. “I asked her, ‘when have you ever been scared to do anything?’”
“Although it was terrifying, it was a great experience,” said McKinlee. “I learned so much while I was there, and it was an honor to compete with the best of the best. Having this opportunity gave me a confidence boost and taught me that everybody is still learning, and I can do anything I set my mind to! I’m so grateful for my technical training and I’m excited to keep learning.”
“Everything has been a positive thing with her and technical education. It allows her to be what she has meant to be,” her dad added.
McKinlee is the only contestant from Utah. The show is on the MotorTrend App.