Jeremy Dool keeps his Uintah Basin Technical College Residential Construction certificate displayed on the wall of his office.  He is proud of it and tells people that he “is from UBTech.”

He sounds like a typical graduate, until you learn that he earned his certification while serving prison time at the Duchesne County Jail

“I made some bad choices, I got in a drunken fight and a guy almost died,” Dool explained.

Before prison Dool was a family man, a good member of society. “No drugs, I owned a home, had a wife and kids,” he said. “I had a good income.”

When he was released from prison six and a-half years later he was divorced, penniless, he owned nothing and of course, was without a job.

Yet, there was one thing he did have, that was not there before his prison term.

Today, just a year after his release Dool is employed as a construction superintendent. He was at the job site of the $140 million construction project he helps oversee while being interviewed for this story. 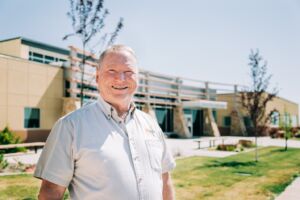 UBTech Residential Construction instructor Ken Pugh teaches state inmates construction trades by building homes and working on related projects. Inmates who have completed the program over the years and served their time have been able to transform their lives thanks to their new career option. They said they are grateful for Pugh’s knowledge of the trade and for the kindness he shows them.

He attributes his mighty change of heart and bright future to the mentoring and education he received through UBTech’s Residential Construction program and instructor, Ken Pugh.

“In prison every single person you encounter treats you like a monster. Ken did none of that,” Dool said, adding that at first it came as a shock.

“When I got to Duchesne, I was actually treated like a human being again. I was amazed at how good of a person Ken is,” said Dool.

“He is a master carpenter pure and simple. His teaching and his interpersonal skills far exceeded anything I could possibly get. It was not just the learning; it was the atmosphere he creates. The peacefulness, that caring – he cares about you.

“It catapulted me,” Dool said.

UBTech’s 14- week Residential Construction program has successfully been taught at the jail for decades. For the past six years Ken Pugh, has been the instructor.

The training is open to Utah State Prison inmates housed at the Duchesne County Jail. To enroll they must meet strict qualifications.

Some of Pugh’s students have never held a hammer or tape measure in their lives. Others come with years of work experience in various aspects of the construction industry.

The program – which runs year-round – includes both classroom time, assigned reading and hands-on training. Inmates build homes for qualifying low-income Duchesne and Uintah county residents, as well as help remodel and build cabinets for local government offices. They may also buy their own supplies and build something of their own choosing, which their families can take home. 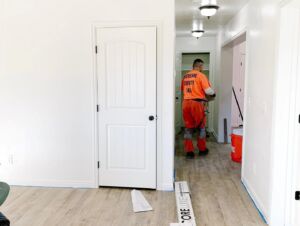 A Utah State Prison inmate uses his new skills to help complete the finish work on a home built by inmates. The men are enrolled in UBTech’s Residential Construction program at the Duchesne County Jail. Inmates in the program are close to being released after serving their time. The program teaches the men a new trade they can use upon their release.

Like many of Pugh’s students over the years, Dool keeps in contact with his former instructor. He is fortunate enough to be in a position now to offer the potential of well-paying construction jobs to others who graduated from UBTech’s Residential Construction program at the jail.

Dool has either helped hire or found jobs for several of the program graduates. Some he knew personally in class; others were referred to him by Pugh.

According to Dool, one of them “was a gang banger – no carpentry skills, no work skills, nothing.”  Yet, Dool said this young man gained the construction and work skills he needed for a new life outside of prison, thanks to the opportunity that Pugh and UBTech provided.

“He is now my foreman,” said Dool. “He runs my crew. If not for this program and watching him want to learn and want to build those houses, I guarantee he would be back in prison.

“These guys would not have had a chance when they got out. But when you go from that (prison) environment to where a guy actually cares about you and is teaching you something about your future, it gives you hope. Ken gives people hope,” Dool said.

As for Pugh, he simply loves his job and his students.

“I see wonderful students who are just like you and I, but who made a mistake big enough to land them in prison. I see people here with as little as 2 years (of time to serve) or as many as 25 years.”

His students vary widely in age – from those in their 20s, up to their late 60s. Their crimes also run the gamut, as do their construction skills, or complete lack of them.

“Basically, we are teaching them that the construction industry is a good place to find a decent paying job even if you have a record,” he said.

At the completion of the program the Board of Pardons allows 4-months off the inmate’s sentence. “That is another incentive for them – learn a trade and receive a time cut,” said Pugh. 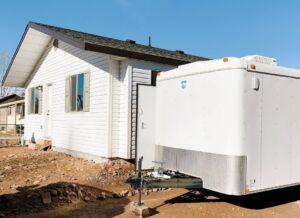 The outside of a home built by state inmates housed at the Duchesne County Jail. The homes go to low-income families in Duchesne and Uintah counties who otherwise would not be able to afford their own home. The home is constructed on site at the jail and transferred in two sections to the property where the home will be located.

“We do our own framing, we get a little insulation done, we do finish carpentry, doors, custom closets, baseboards, our own cabinetry, and we put on our roofing and our siding. We do everything we can do here.”

UBTech partners with Uintah Basin Association of Governments on the home building project. UBAOG helps fund the construction materials and selects the low-income residents who eagerly look forward to the new home they can now afford due to the low cost of labor.

The homes- which are built on site on the prison grounds in two sections – have to be built “sturdy enough to travel down the highway at 60 mph and be picked up by a crane,” Pugh said.

They are transported from the jail to the land where the two pieces of the structure are joined and the home is completed.

One man who graduated from Pugh’s class said the program’s importance can’t be exaggerated.

“The program builds men, not just houses,” said Tom, who asked that his real name not be used. “The participants build self-confidence, self-respect and self-worth.”

For Tom, being able to take the UBTech program during his incarceration “was humanizing.”

“It was very refreshing to be able to go outside to do something meaningful,” he said. “With Ken you did not feel someone hovering over you. He is a wonderful man and a talented carpenter as well.”

Tom was well aware of how difficult it would be to find a job with a prison record and wasn’t certain what his new life would look like. Thanks in part to Pugh and the UBTech Residential Construction program he is now self-employed, operating his own custom woodworking business in the Vernal area.

Before he went to prison, Levi Strickland worked driving a forklift. While in the program he learned a new trade but more importantly was chosen by Pugh as a teacher’s aide. Strickland said through that experience he learned to be something he never was before – a leader.

“Ken helped me with my leadership skills because he put me in that (teacher’s aide) position. I had never been a leader or had the self-confidence to tell people what to do,” Strickland said, “but Ken told me he liked how I worked with other people.”

Strickland, 38, is working as a temp at Precision Building Systems in Tooele where he hopes to be hired on full-time.

“This was a big change for me but going to the program and getting that certification gave me this option,” he said.