Four Uintah Basin Technical College students who competed in the National Leadership and Skill Conference (SkillsUSA) are climbing the ladder to national success – with one member of the prestigious group, Dalton Van, taking the silver medal in the welding competition.
The Nationals SkillsUSA event occupies a space equivalent to 20 football fields, with more than 6,200 contestants in 100 separate events. 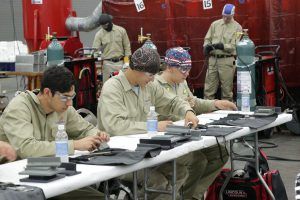 Dalton Van, middle, competed in Welding at the National SkillsUSA competition in Louisville, Kentucky. He brought home a silver medal, qualifying to compete later this year at the World Trials.

“We have a national medalist and three returning champions who improved their placement over last year,” said Tammy Wilkerson, UBTech vice president of Instruction.

“Three of four of our UBTech students were among the top ten in the nation with two of them ranking in the top five. They all should be very proud of their success and accomplishments, I know we are,” said Wilkerson.
Van, a rookie at the national SkillsUSA contest held recently in Louisville, Kentucky, earned recognition as one of the top welders in the nation. His national placement gives UBTech bragging rights to producing three consecutive years of welders eligible to compete at the welding World Trials.
“I am proud of the quality of instruction that UBTech has proven time and time again,” said UBTech President Aaron Weight. “To have three consecutive welders be able to compete in the World Trials is an astonishing achievement.”

A welder must place in the top four at National SkillsUSA in order to compete at the World Trials. UBTech’s past welding champions include: Chandler Vincent, 2016 and Jordan Wynn, 2017. Vincent won the World Trials in 2016, and placed in the top 5 at the WorldSkills Competition. Van and Wynn will be competing at the 2018 World Trials.
The three other State Gold Medalists from UBTech who competed against the best in the nation in their respective field of studies were Madison Bulloch, Jaylen Reary and Masen Holmes.

The three were returning state champions to nationals this year and each student’s performance resulted in improving their national standing, said Wilkerson.
Bulloch improved her performance in Medical Terminology moving up to a notable 4th place at nationals, from 7th place last year. She will have the opportunity to compete again in 2019. 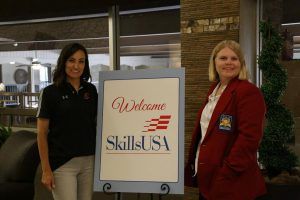 Kim Fletcher (left), UBTech instructor, pictured with Madison Bulloch (right) who competed in Medical Terminology. Bulloch placed in the top 5 of the nation.

Bulloch repeated the Medical Terminology course her junior year as an aide.

“The previous year I took it as a student, but this year being an aide in the class helped me sharpen my skills and be more prepared as I went to compete again at nationals,” Bulloch said. “Next school year I plan on enrolling in the UBTech Surgical Technologist program and be one step closer to medal at nationals.” 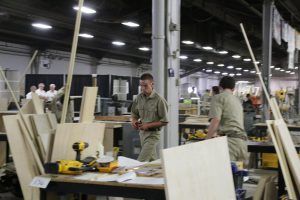 Jaylen Reary competed at the National SkillsUSA competition in Cabinetmaking. He came home as one of the top 10 in the nation.

Reary, a recent Union High graduate, placed 10th in the nation in Cabinetmaking. He is the son of long-time UBTech Cabinetry instructor, Aaron Reary. Jaylen Reary plans to attend Utah Valley University in two years when he returns from serving an LDS mission to Knoxville, Tennessee. At UVU he will participate as a track athlete and study cabinetry – following in his father’s footsteps.

Holmes who competed in Electrical Construction Wiring, placed 16th this year, up from a 32nd ranking in 2017. A sophomore, Holmes has additional opportunities to compete and looks forward to honing his skills in order to ascend higher on the podium.

“My instructor Mr. Hunter made a wall with wiring components just so I could practice,” said Holmes. “I appreciated how he found time to train with the students wanting to compete.”

UBTech is celebrating their 50th anniversary and Governor Herbert declared 2018 as the year of technical education, noted Weight. 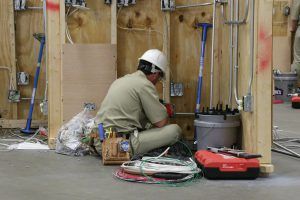 Masen Holmes competed in Electrical Construction Wiring at the National SkillsUSA competition. He placed 16th in the nation.

“Students like these are prime examples of the power of technical education. Students can be successful right now – at their young age. It’s exciting to watch these students grow from contenders to champions,” Weight said.

Let us tell you more!

Find out about enrollment here.