Uintah Basin Technical College announced their Student of the Year for 2018 / 2019 during a banquet held at the Vernal campus Wednesday.
“One of the best parts of the student of the year is that it comes with a gigantic check for $1,000 paid to McKinlee Thacker,” said Dean Wilson, the vice president of student services at UBTech.

“I am so excited to represent UBTech as the student of the year,” said Thacker, who is enrolled in both the Automotive Maintenance and Light Repair program, and Welding program.“I truly do believe in the power of technical education and what it can do for people, the way it can change lives. I think it is a very important aspect in today’s society and it is completely under appreciated.”

The evening began with introductions from college officials and remarks by the previous student of the year, Faith Burk, who shared what the honor has meant to her during the past 12 months and the story of her life before she returned to school. 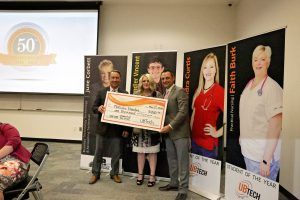 Eight nominees were vying for the right to become student of the year for 2018 / 2019. Following a short video presentation that gave each of them the opportunity to tell attendees something about themselves, they were honored:

“As we as a committee sat down to make a determination of who would be the student of the year, we had so many strong candidates, we literally could not come to a consensus easily,” said Dean Wilson, the vice president of student services at UBTech.

Wilson, who said he doesn’t like “either / or statements,” said the committee felt they needed to do something to honor each of the students.
“We started to think outside of the box,” he said. “What are some of the things that we could do to help highlight all of the great work that our student’s accomplished? So, we took an off the books approach. We had eight strong candidates, each of which represents a different part of our institution. We thought that we would highlight what character trait, what best exemplifies each of the students.”

As a result, each one of the seven students who were not selected to become student of the year, was also honored during the banquet:

As for Student of the Year, that award went to Thacker.

“From the day I met her, I’ve always called her a thoroughbred,” Wilson added. “Thoroughbreds will run hard, they run fast, but sometimes you’ve got to pull the reigns on them just a little bit to get them to slow down. She is a thoroughbred in every sense of the word and we are so blessed to have her as our student of the year.”

“I am excited to represent UBTech and the power of technical education,” Thacker said.