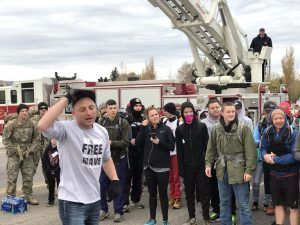 “We had 189 participants in this year’s run,” said Stephanie Carter of UBTech. “The runners carried a combined 2,490 lbs., traveling 587 miles, which is the distance from Vernal to Albuquerque, New Mexico.”

Ruck is a term used to refer to the military packs. Rucking has a long-standing tradition in the military, where long-distance hikes are endured while soldiers wear heavily loaded backpacks. In areas where troops face real-world conflict, it is the norm for troops to carry rucks loaded with gear, weighing well more than 100lbs. Often times these ruck marches are timed in an effort to prepare soldiers to relocate themselves and essential gear quickly.

The next Ruck run is scheduled to take place at the Vernal Campus on Nov. 9, 2019.